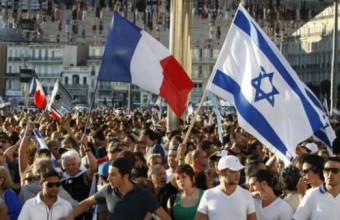 France’s Minister of Interior, Bernard Cazeneuve, Thursday, urged Jews not to leave France because ‘it would provide an unbearable posthumous victory to murderers.’PNN reports that Cazeneuve gave a speech during a tribute to the the victims killed by Jihadi Mohamed Merah in Toulouse, on March 19, 2012. Merah killed four Jews, including three children and three French paratroopers.

‘Through you, France is attacked, and if you leave, it is France who kneels,’ said the Minister, who added ‘we do not intend to give in to terror and we will remain standing… ‘

Former president Nicolas Sarkozy, who was also at the event, said: ‘You belong to the history of France. France would not be France without the presence of Judaism and the Jews of France.’

Earlier this year, Benjamin Netanyahu Israel’s Prime Minister called on French Jews to immigrate to ‘Israel’ following the January attack in the French capital where four Jews were killed in a kosher supermarket by IS-linked Ahmedy Coulibali.

Moreover, the Israeli government has taken steps to encourage French immigration, approving an initiative that includes a hefty boost in the amount of Israeli emissaries operating in France; a significant increase in the public relations campaigns targeting French Jewry, and the implementation of new procedures that will expedite the absorption process for French Jews.

Furthermore, the Israeli government is developing draft measures to recognize French diplomas and other qualifications.