Dr. Hanan Ashrawi on the 39th Commemoration of Land Day 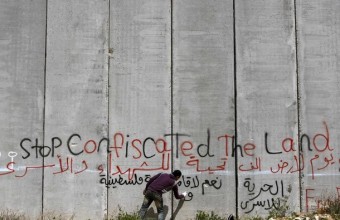 “On March 30, 1976, as thousands of Palestinians inside Israel protested Israeli plans to steal 60,000 dunams of land in the Galilee, six Palestinians were killed and hundreds were injured and arrested…Thirty-nine years later, in the face of the brutal military occupation imposed by Israel, the Palestinian people still remain steadfast in their struggle to defend their inalienable rights to independence, freedom and justice.

Israeli Prime Minister Benjamin Netanyahu is succeeding in completing the Zionist project and pressing ahead with Israel’s systematic policies of settler colonialism, apartheid and ethnic cleansing, showing a total disregard for Palestinian human rights and dignity.

Furthermore, Palestinian citizens of Israel are constantly deprived of their social, political and economic rights and treated as second-class citizens. Israel’s policies of racism, hatred, extremism, and violence constitute a deliberate effort to legalize discrimination and xenophobia and superimpose “Greater Israel” on historical Palestine at the expense of all Palestinians.

However, even in light of such grave injustices and flagrant violations of international law, Palestinians everywhere remain undeterred in engaging in non-violent popular action, including political, legal and diplomatic efforts, to preserve their identity, continuity and presence on Palestinian lands. Regardless of wherever Palestinians live, they will always remain an indivisible part of Palestine.

Israel has been exempt from accountability for its violations and deliberate acts of aggression and violence against the Palestinian people for far too long. All members of the international community, including the United Nations, the European Union, and the United States, have the legal and moral responsibility to ensure the protection of the Palestinian people and to serve the cause of peace and justice by adopting bold initiatives and concrete steps to counter Israel’s impunity and war crimes.”