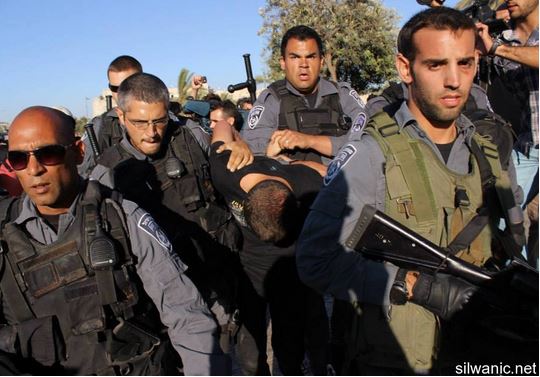 He added that the soldiers also kidnapped two children identified as ‘Abed ‘Issa, 16, and ‘Omar Abu ‘Asab, 15, from the Shu’fat refugee camp, in addition to Mohammad ‘Awsha’ Mona, 20, and another Palestinian of the Bseiso family in the Old City.

Abu ‘Asab said the soldiers violently searched the homes of the kidnapped Palestinians, causing property damage, and moved them to the al-Maskobiyya interrogation facility, west of Jerusalem.

The official further stated that, on Sunday, an Israeli court ordered ordered a Palestinian woman, and two young men, from Nazareth, under further interrogation, after accusing them of “assaulting the police,” and “disturbing the peace.”

He said Israel is deliberately targeting the Palestinians who try to enter the Al-Aqsa Mosque, especially amidst the escalating attacks carried out by Israeli fanatic groups.

Lawyer Mohammad Kteilat, of the Qodsona Foundation for Human Rights, said the police attacked and kidnapped Samiha Shahin while leaving the Al-Aqsa Mosque, in addition to kidnapping Mohammad Zo’abi, 17, and Ahmad al-Husseini, 17, as they were in the mosque’s courtyards.