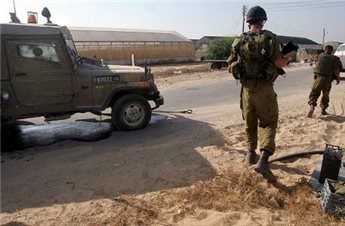 Three Palestinians where shot and injured by Israeli forces in Khan Younis, southern Gaza Strip, a medical official said on Monday. Ministry of Health spokesman Ashraf al-Qidra said, according to Ma’an News Agency, that two youth were shot east of Khan Younis and were taken to the European Hospital for treatment of moderate injuries.

An Israeli military spokeswoman said Israeli forces fired toward one Palestinian who she called a ‘main instigator’ of a violent riot in southern Gaza.

She said that Palestinians rolled burning tires and hurled rocks at troops.

Forces fired warning shots before aiming at the participants’ lower extremities, she added.

The incident came the same day as Palestinians across the West Bank and Gaza took part in marches to mark the 39th anniversary of Land Day, commemorating Palestinian protests against Israeli land seizures that were violently suppressed on Mar. 30, 1976.

Marches in Gaza were called for by coalition group the National and Islamic Forces, which called for political unity to end the suffering of Palestinians across the occupied territories as well as an end to the Israeli-administered blockade of the Gaza Strip.

The group also used the opportunity to call on the Palestinian political leadership to seek full Palestinian membership at the UN.

Also participating in the march were Islamic Jihad, the Popular Resistance Committees and the Palestinian Arab Front.

In a statement, the Islamic Jihad movement said that armed resistance was the only means toward ending the Israeli occupation, adding that the Israel-Palestine conflict would not end until ‘every inch of land in Palestine’ had been freed.

The Popular Resistance Committees, meanwhile, said that all differences among Palestinians should be put aside in order to face Israel and fight Israeli policy of confiscating Palestinian land and building illegal settlements.

The West Bank saw thousands take to the streets in commemoration of Land Day, despite Israeli attempts to suppress protests.

In the village of Huwwara in southern Nablus, Israeli forces attempted to suppress a march in which more than 2,000 Palestinians took part.

Other Palestinian leaders taking part in the march included Mahmoud al-Aloul, a member of Fatah’s Central Committee, Qais Abd al-Karim, member of the Democratic Front for the Liberation of Palestine’s politburo, and MP Mustafa al-Barghouthi, among others.

Witnesses said that hundreds of Israeli soldiers were deployed.

Witnesses also said that they fired tear-gas canisters at an elementary school, despite dozens of children still being inside the school.