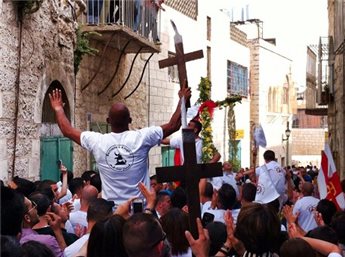 Orthodox Christian pilgrims from around the world have begun arriving in Jerusalem to take part in Easter celebrations.Pilgrims included Christians from Russia, Greece, Romania, Cyprus, Bulgaria, Serbia and other countries.

The archbishop of the Sebastian Greek Orthodox Church, Atallah Hanna, addressed crowds of pilgrims celebrating Lazarus Saturday in the al-Eizariya saying: ‘Your being here in Jerusalem makes celebrating Easter special, and shows the importance of this holy city to Christians of the world.’

Archbishop Hanna added that Palestinian Christians welcomed pilgrims, and were ‘proud to be living in the holy land of Palestine.’

He said: ‘We hope that all Christian churches of the world would look upon Palestine and the suffering of its residents, as the city of peace is as far as possible from being in peace due to unjust actions towards its people.’

Hanna also called upon people to pray for Jerusalem and Palestinians.

Orthodox Christians, who follow the Julian calendar, are celebrating Palm Sunday this Sunday, and Holy Saturday and Easter Sunday next weekend.

Christians belonging to Western Christian denominations, including Roman Catholics, use the Gregorian calendar, and are celebrating Easter Sunday this Sunday.

Dozens of elderly Palestinians in Gaza have been forced to postpone plans to pray at the Al Aqsa Mosque compound as a result of the Jewish holiday.

Israeli forces restricted their access following calls from right-wing Israeli groups to evacuate the compound so that they could enter for Passover and offer sacrifices, even though Israel is under an agreement not to allow non-Muslim worship on the site.

Concerns deepened among Palestinian Christians hoping to freely observe their religious traditions this Holy Week, as Palm Sunday celebrations among Western denomination Christians in Beit Jala were brought to an abrupt end last week when Israeli troops raided the majority-Christian town near Bethlehem and threatened locals.

Palestinian policemen on duty near the celebrations were threatened by Israeli soldiers with arrest during the raid, which took place in the middle of the day as Sunday mass was coming to an end.

Israeli authorities have in the past come under sharp criticism for the violation of religious freedom of Palestinian Christians, who number around 200,000, including 50,000 in the West Bank and 1,000 in Gaza.

In March of last year, Christians from East Jerusalem issued a statement complaining that Christians are often denied access to the Church of the Holy Sepulcher during the Easter holidays.

Each Easter, checkpoints are erected ‘at the Gates and in the alley, thus preventing the worshipers from free access to the Via Dolorosa, the Church of the Holy Sepulcher, and the vicinity of the Christian Quarter.’

A report published by the US State Department in 2012 made similar observations, stating: ‘Strict closures and curfews imposed by the Israeli government negatively affected residents’ ability to practice their religion at holy sites, including the Church of the Holy Sepulchre and Al-Aqsa Mosque in Jerusalem, as well as the Church of the Nativity in Bethlehem.’

It added: ‘The separation barrier significantly impeded Bethlehem-area Christians from reaching the Church of the Holy Sepulchre in Jerusalem and made visits to Christian sites in Bethany (al-Eizariya) and Bethlehem difficult for Palestinian Christians who live on the Jerusalem side of the barrier.’