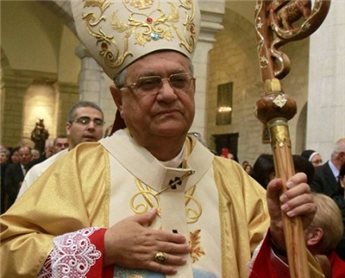 The Latin Patriarch of Jerusalem urged Christians to stand firm in the face of tragedy, as worshipers massed for Easter Sunday at the site where they believe Jesus rose from the dead. Internationally, Pope Francis condemned the indifference and ‘complicit silence’ to extremist attacks on Christians as he presided over Easter ceremonies, Sunday.As dawn broke over the Holy City, thousands of Christian pilgrims from all over the world gathered to celebrate Easter and remember the resurrection and the miracle of the empty tomb.

Addressing worshipers at the Church of the Holy Sepulcher in the heart of Jerusalem’s Old City, Latin Patriarch Fouad Twal spoke of the suffering gripping the war-torn Middle East, urging the faithful to demonstrate courage, AFP has reported.

‘Every day in the Middle East, we are witnesses of tragic events that make us even contemporaries of Calvary,’ he said in an address at the sprawling 4th century basilica which Catholic and Orthodox Christians believe was built on the site where Jesus was crucified, buried and rose again.

‘Let us bury in the tomb of Christ our worldly inclinations, our contradictions, our religious divisions, our hostilities, our lack of faith and our fears … From this tomb emanated light and peace. And here today, from this battered Holy Land, light and peace must spring out again,’ he said.

Tens of thousands of Christians have fled their homes in Iraq and Syria over the past year in fear of advancing militants of the Islamic State group.

But Twal said Christians were called to the Middle East ‘to be signs of hope beyond everything,’ he said.

‘Our future in this region and in the world is uncertain and even incomprehensible, but do not be afraid: Christ assured us He is ‘with us always, until the end of time’.’

In a separate celebration just outside the walls of the Old City, around 1,500 people gathered at the Garden Tomb at sunrise to celebrate the resurrection on a sunny but chilly morning.

There they gathered by a rock-cut tomb which stands in the shadow of a skull-shaped hill which is seen as an alternative site of the crucifixion and resurrection.

Located in Israeli-annexed East Jerusalem, the so-called Garden Tomb was first discovered in the 19th century and quickly became a popular alternative site to the Church of the Holy Sepulcher.

As the sun rose, the crowds sang hymns and choruses, many of them snapping photos of the entrance to the empty tomb.

‘It is just awesome to be here,’ said a 41-year-old woman from South Korea who gave her name only as Miok.

‘The Bible talks about Jerusalem being a house of prayer for all nations and here you can see people from all these nations coming together to worship him at the same time,’ she told AFP.

Shagufta, a woman in her 50s from Pakistan, described the experience as ‘very exciting.’

‘We’ve never experienced anything like it before, to see all these people from all over the world and to be where Jesus lived and walked,’ she told AFP.

According to the Gospels, Jesus was crucified and buried a day after he celebrated Passover, then rose from the dead on the morning of what has become known as Easter Sunday — the most important day of the year for Christians.

Known as Gordon’s Calvary after the British general who discovered it in 1894, the garden is situated some 200 metres (yards) outside the Old City walls under the shadow of a rocky outcrop that looks like a skull, and is believed to be Golgotha, which is also known in Latin as Calvary.

Orthodox Christians celebrate Easter next weekend, according to the old-style Julian calendar.

Pope Francis condemned indifference and ‘complicit silence’ to extremist attacks on Christians as he presided over Easter ceremonies in the wake of a massacre of nearly 150 people at a Kenyan university by Shebab Islamists.http://www.imemc.org/newswire?search_text=orthodox&button=Search+%3E%3E

The leader of the world’s 1.2 billion Catholics brought up the extremist persecution of Christians as the holiest ceremonies of the Church calendar reached a climax Sunday, when believers celebrate the resurrection of Jesus.

The militants behind Thursday’s university attack that shocked Kenya are reported to have separated out their victims into Muslims and non-Muslims, before killing the Christians.

‘Today we see our brothers persecuted, decapitated, crucified for their faith in you, under our eyes and often with our complicit silence,’ the pope said after the traditional Via Crucis (Way of the Cross) procession through Rome on Friday, which recreates Christ’s last hours before he was crucified.

The Vatican has increasingly voiced frustration that attacks on Christians in places such as Iraq, Libya, Pakistan and Nigeria have not been more strongly condemned by Muslim authorities and Western governments.

In December, the pope said Christians were being ‘driven from the Middle East’ in a message to Iraqi Christians forced to flee by Islamic State group militants.

‘Due to an extremist and fundamentalist group, entire communities, especially, but not only, Christians and Yazidi, have suffered and continue to suffer, inhuman violence because of their religious and ethnic identity,’ the pope said.

He then urged Muslim leaders worldwide to ‘clearly’ condemn terrorism carried out in the name of Islam, and called for an end to the persecution of Christians in the Middle East.

In France, Prime Minister Manuel Valls tweeted on Saturday: ‘We have to give our total support to Eastern Christians who are the victims of barbarism.’

He made the comment after facing criticism after a poster for concerts in support of Christian communities in Syria and Iraq was banned from the Paris transport system.