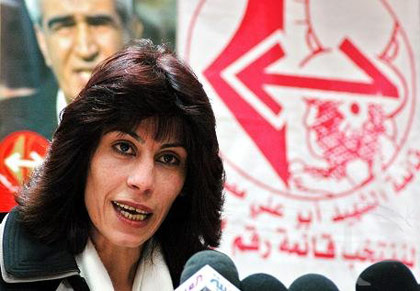 The Palestinian Center for Human Rights (PCHR) denounced an Israeli decision to put Khalida Jarrar, Member of the Palestinian Legislative Council (PCL), under a six-month administrative detention.PCHR calls upon the international community to practice pressure on Israeli authorities to put an end to the administrative detention policy, which violates the right to a fair trial.

According to human rights sources, a hearing is supposed to be held at the military court in Ofer, west of Ramallah, on 08 April to confirm or reduce the detention order.

The order came four days after Jarrar had been arrested on Thursday morning, 02 April, when Israeli forces raided her house in al-Bireh and took her to Hasharon prison for women in Israel.

It should be noted that Ms. Jarrar is a PLC Member representing Abu Ali Mostafa Bloc and a member of the political bureau of the Popular Front for Liberation of Palestine (PFLP).

Israeli forces raided her house previously on 20 August 2014 and handed her a military order transferring her to Jericho until 19 February 2015 on the pretext she ‘poses threat to the security of the region and she should be placed under private surveillance’.

However, Jarrar refused to sign the order that was written in Hebrew, but Jarrar refused to comply with the order and held a sit-in in the PLC yard in Ramallah. Later on, Israeli forces reduced the transfer period to one month, which already ended in mid-September.

Over 500 prisoners are placed under administrative detention in Israeli jails, 15 of whom are PLC Members, including Dr. Aziz Dweik, Speaker of the PLC, in a flagrant violation of the right to a fair trial, including the right to receive an appropriate defense and to be informed of the charges against them.

Administrative detention is applied by an administrative order only without referring to a court, thus violating the standards of impartial judicial procedures, as Israeli forces detain persons in secret preventing the detainees of their lawyers from learning about their charges, or even about evidence used against them.

As a result, they are denied the right to be properly defended in fair trial In light of that, PCHR calls for:

1. The immediate release of Khalida Jarrar and all Palestinian PLC members in Israeli jails; and

2. Human rights organizations and international solidarity organizations to conjugate efforts to force Israel to stop the administrative detention policy, which violates the right to fair trial.