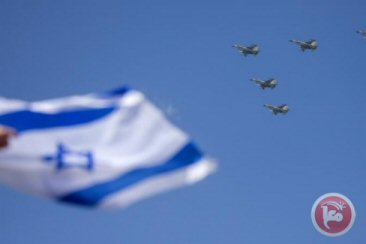 Palestinians usually mark the day on May 15 by commemorating what they call the Nakba — or ‘catastrophe’ — of Israel’s creation.

But, thousands of Palestinian citizens of Israel, many waving Palestinian flags, gathered Thursday in the Galilee for a protest march timed to coincide with the Israeli celebrations.

AFP reports that the demostration centered on the ruins of Al-Haditha, near Tiberias, one of nearly 400 Palestinian villages destroyed in the war that erupted after Israel’s founding.

‘Our grandfathers who suffered displacement asked us not to sell our land and to return to it and not give up,’ activist Hammad Abu al-Haija told the crowd.

More than 760,000 Palestinians — estimated today to number 4.7 million with their descendants — fled into exile or were driven out of their homes in the conflict that followed the creation of Israel.