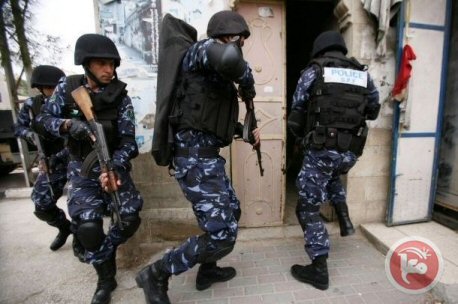 A 15-year-old Palestinian was injured and his brother arrested when the two were assaulted by Palestinian police in Nahalin, southwestern Bethlehem, late Friday, his family said.The parents of Abd al-Hamid Ahmad Mahmoud Najajreh said that their son had been badly hurt in his head, arm and foot by PA police officers who hit him with the butts of their rifles and sticks while breaking up a fight that the boy’s family say he had not taken part in.

‘Rocks were thrown at PA forces, but not by my sons,’ their father told Ma’an News Agency, adding that the police arrested Abd al-Hamid’s older brother, Mahmoud, 18, for throwing rocks at PA forces even though he had not been in the town at the time of the fight.

He said Mahmoud had been with him in Bethlehem at the time of the fight, but was arrested as soon as they arrived home.

Speaking of Abd al-Hamid, the father said: ‘My son was assaulted by PA forces and thrown in the street; locals gave him first aid and took him to the town’s clinic, which transferred him to the al-Yamama Hospital where he currently is.’

PA police told Ma’an that an investigation had been opened into the incident, but confirmed that police and security forces had entered Nahalin to intervene in a fight among residents.

They added that Palestinian security forces were assaulted with rocks as they broke up the fight, and a number of those who had thrown rocks were arrested by PA forces.

The Palestinian Authority has come under fire before for human rights abuses against Palestinian civilians in the occupied West Bank.

UN High Commissioner for Human Rights released a report in 2014 detailing such abuses, including arrest and questioning of journalists for work deemed critical of the PA, arbitrary detention, torture, and ill-treatment of detainees.

The report also pointed to a lack of effective and transparent investigations into unlawful killing or torture by PA security forces, and neglect to curtail gender-based violence and killing.

No further information was given regarding others detained on Friday.