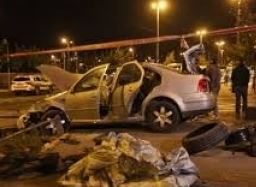 Israeli Ynet News said the incident took place near the Mount of Olives, and that three of the officers suffered mild injuries, and one suffered moderate wounds on her lower limbs.

Clashes took place in the area after more police units, and ambulances, rushed to the scene to evacuate the wounded officers.

The Ynet News Agency also said the, following the attack, police fired live rounds toward the vehicle, and conducted searches in the area before locating the car, but did not locate the driver.

The incident comes amidst increasing tension in occupied Jerusalem after the police shot and killed, on Friday at night a Palestinian teen, allegedly, after he attempted to stab soldiers. His family and eyewitnesses refuted the Israeli claim.

According to Ynet News, a Molotov cocktail was also thrown at an Israeli settlement bus, on Route 443 heading to Jerusalem. The bus caught fire; no injuries were reported.

On Saturday at dawn, the army invaded the home of the slain Palestinian teen, kidnapped his father, and placed preconditions for transferring the child’s body to his family; the family refused the Israeli preconditions.

Medical sources have reported that at least twenty Palestinians have been injured by army fire, including a young man was shot in the head by a rubber-coated metal bullet, and was moved to a hospital for treatment.

Clashes also took place in Jabal al-Mokabber village after dozens of soldiers invaded it, and fired flares, in addition to several sounds of live ammunition.

The Wadi Hilweh Information Center in Silwan (Silwanic) said settlement guards fired rounds of live ammunition into the al-‘Ein al-Foqa area in the town, and that a number of Palestinian youths threw Molotov cocktails into an illegal settlement outpost.

Silwanic added that clashes also took place in ‘Ein al-Lowza area in Silwan, and that the soldiers fired rubber-coated metal bullets on a number of homes, and invaded at least one.
Similar clashes took place in Bab Hatta neighborhood, and the al-Wad Street, in Jerusalem’s Old City. Police officers and soldiers also broke into homes in the African Neighborhood and searched them; allegedly looking for Palestinians who used fireworks against the army during clashes that took place in the area.

On Saturday evening, soldiers shot and killed a Palestinian who allegedly stabbed a border police officer “in the head and chest” near the Ibrahimi Mosque in Hebron. Israeli sources said the wounded soldier was moved to a medical center, suffering a moderate injury.