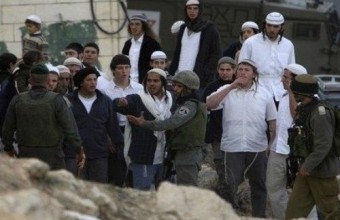 A group of Israelis from settlements in the occupied West Bank district of Hebron, Sunday morning, were reported to have stoned Palestinian homes in the center of the city.Local sources said that the settlers broke into the city from the Mat Yishai, Bet Hadasa and Bedoya settlements and threw stones at homes in the Tel Rumeida neighborhood, causing terror among the children.

Local sources said that the settlers tampered with residents’ belongings and tried to scare them using sharp tools, according to the PNN.

Clashes in Hebron took place yesterday following the murder of 22-year-old Palestinian youngster Mahmoud Yahia Abu Jheishe, near the Ibrahimi mosque in Hebron, after he stabbed and wounded Israeli soldier.