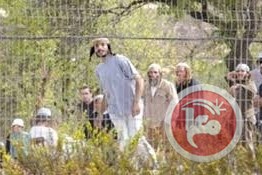 A group of Israeli settlers damaged water pipes serving the Palestinian community in Hebron’s Old City, Tuesday, according to locals.Mufid al-Sharabati, a resident of Shuhada street, told Ma’an News Agency that a group of settlers deliberately made holes in the plastic water pipes providing water to Palestinian homes.

The burst pipes caused water to flow into the street, with Palestinian residents calling on the municipality to quickly fix the damage.

Israel closed the road during the Second Intifada, and a military checkpoint restricts Palestinian access to the area.