Israel Paving the Way for Another Nakba? 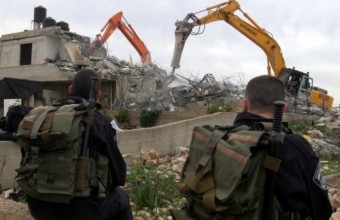 [Translated from Arabic]Every Arab citizen inside the Green Line (Israel), seemingly, has the shelter to obtain a normal life, but, on the ground, the occupation government and its institutions are working, determinedly, within a total disregard of so-called ‘structural maps’ which lead to Arabs not being able to obtain permits to build on their own lands.

In villages of the Negev, the coast and the Galilee Triangle, and for the past 20 years, the Israeli government has not ratified a single structural map to include the Palestinians. Palestinian flats and towns are shrinking, while their population is doubling. This has led to the construction of dozens of housing units constructed without a building permit, while the owners live under the threat of demolition.

There are more than 80 thousand Arab citizens living in unrecognized villages, most of which were established before the war of 1948, and despite claims by Israel that it will stop the quest regarding the Prawer plan, which threatens to displace tens of thousands and the confiscate about 850 thousand acres of land; Israel is still working very hard to implement its application on the ground, and adapting laws to serve its objectives.

In an exclusive interview which PNN correspondence conducted, member of the People’s Committee for the Defense of land and housing, Aziz Turi, said that the Israeli authorities have continued to implement the demolition policy, as it seeks to compel Palestinians inside the Green Line to abandon their lands and move to live in the villages on the official the list in order to ground the use of settlement objectives.

Turi added that Israel deprives Palestinians of the Negev from all social and economic services such as water, electricity, construction of roads, secure public transport, and in addition to the provision of health services and education for children. Furthermore, they live in constant fear of house loss and shelter, and live in the open because of the demolitions.

The towns of the southern triangle, like the Negev, constantly suffer from the scarcity of construction land, the inability to expand flat construction not having been on the structural building map since 1963. Despite the continuous objections by residents, in cooperation with the People’s Committees, the Israeli occupation did not take any of this into consideration, which means that the map will not be ratified for many more years.

In an article entitled ‘The Housing Crisis in Qalenswa, Where To?’, political activist Dr. Abdul Rahman Mari says that the issue of houses threatened with demolition in [Qalenswa] town is not new. In fact, it has been the main-focus event for the past two weeks, following the demolition of citizens’ houses under the pretext of unlicensed construction. After a massive public demonstration, this unfair decision was postponed only for a few months.

In Lod and Ramle, the situation is no different. More than 70% of the residents are forced to live in houses which Israeli authorities refuse to license.

Engineers in the city point out that there are approximately 3- 4 thousand houses labeled as ‘illegal,’ while the Ramla Municipality, several days before, has issued orders for the demolition of 30 houses constructed in a number of neighborhoods.

On his part, MP Jamal Zahalka, chairman of the parliamentary assembly block, earlier stated that the housing distress among Arab citizens inside the Green Line is causing suffocation, as there is a shortage of about 40 thousand housing units, adding that he does not foresee any forthcoming solutions.

Zahalka said that the housing crisis in Arab towns and villages is not only a product of economic policies but,rather, stems from political and ideological reasons, as the Israeli goal since the Nakba has been to reduce the scope of the land on which Arabs and besieged Palestinian Arabs live.

In context of this topic, PNN reported that since the beginning of 2015, nearly 100 Palestinian houses inside the Green Line were demolished, which was considered the introduction of Zionist predominance of religious savagery to bring settlers and new immigrants to install Israeli ownership on that ground, in addition to further Judaization, as is happening now in occupied Jerusalem.

Palestinians inside the Green Line, last week, organized a demonstration in Tel Aviv, as a rejection against the policy of demolition of their homes by Israeli authorities. A a statement by the Higher Arab Monitoring Committee, at the time, said that the ‘demolition war ‘ on Arab houses, under the pretext of the so-called falsely unauthorized construction, has become very clear.