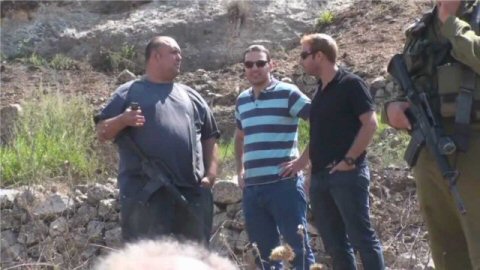 The Palestinian was so alarmed by the settlers’ shouting and threats that they requested that international volunteers from the group Operation Dove accompany him and his son through this exposed area.

When the international volunteers arrived on the scene, the settlers entered the nearby Palestinian village of Kharrouba, from which Israel deported its residents in 1999, entering caves and homes.

And on Friday two Palestinians, a six-year-old child and his sister, were harassed and chased by settlers as they walked to their home in the South Hebron Hills village of Tuba. The settlers screamed at and chased them, frightening the Palestinians who ran away.

These daily incidents of ongoing settler harassment renders Palestinian life in the South Hebron Hills and other places in the West Bank’s Area C, over which Israel has full control, extremely difficult.