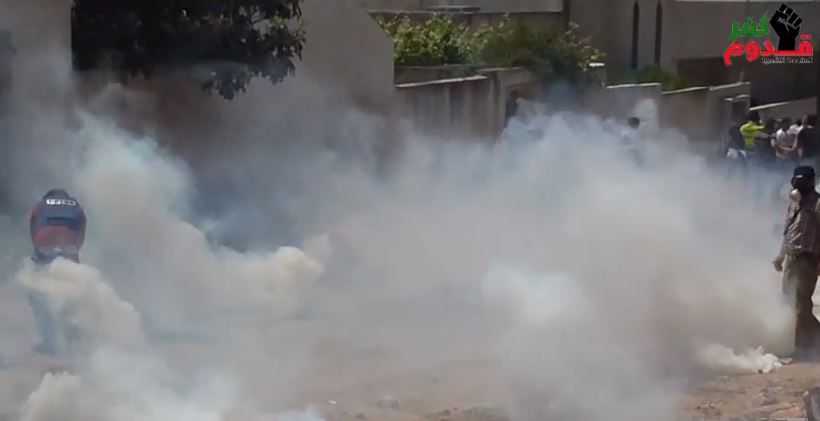 Israeli soldiers attacked, Friday, the weekly protest in Kufur Qaddoum village, near the northern West Bank city of Qalqilia, leading to clashes with local youths; medical sources said two children, three journalists and in international peace activist, have been injured.This week, the protesters marked the 67th anniversary on the Palestinian Nakba, while hundreds of residents marched accompanied by dozens of Israeli and international peace activists, and headed towards the gate that was installed by the army 13 years ago, blocking the village’s main street.

The protesters chanted against the ongoing Israeli occupation, escalating violations, the Annexation Wall and illegal colonies on Palestinian lands.

Coordinator of the Popular Committee against the Wall and Settlements Morad Eshteiwy stated that the soldiers attacked the weekly nonviolent protest, and fired dozens of gas bombs, rubber-coated metal bullets, and sprayed the protesters with waste-water mixed with chemicals.

The soldiers literally showered the protesters, and the village, with dozens of gas bombs, fired in various directions.

The attack led to clashes between the locals and the soldiers who shot and injured three journalists, identified as Ashraf Abu Shaweesh, cameraman of PalMedia News Agency, Mohammad ‘Enaya, cameraman on the Palestine Satellite Channel, and Ayman Noubani, cameraman of the WAFA Palestinian News Agency.

The three camera operators were shot by gas bombs in their arms, and suffered severe effects of teargas inhalation.

In addition, two children identified as Ahmad Emad, 14 years of age, and Sayyaf Mashour, 10, were shot with rubber-coated metal bullets in their legs, while an international activist, identified as Martin, suffered various cuts and bruises after falling onto the ground after the soldiers fired gas bombs towards him.