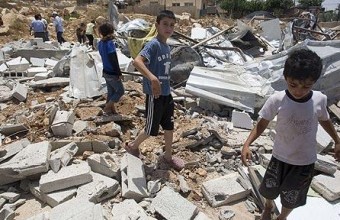 An Israeli court’s order to evacuate and demolish 23 buildings in a northern Jerusalem neighborhood, together with the demolition of an century-old Islamic shrine by Israeli forces in Nablus, has hit the front page headlines in Palestinian dailies, according to the PNN.Al-Quds reported, in its main front page news item, that an Israeli court issued evacuation and demolition notices for 23 apartments in the East Jerusalem neighborhood of Semiramis, located in the seam zone area near Qalandiya checkpoint.

Meanwhile, the Israeli military court of Ofer reinstated the imprisonment sentence of five Palestinian ex-detainees who were released in the Gilad Shalit prisoners swap in 2011, including that of hunger strike icon Samer al-Issawi.

Al-Hayat al-Jadida highlighted in its main front page item that President Mahmoud Abbas is to visit Italy in mid May, in order to attend the canonization of two of Palestinian nuns scheduled to gain sainthood; Marie Alphonsine Ghattas of Jerusalem and Mariam Bawardy of Galilee, both of whom lived in Ottoman Palestine during the 19th century.

Al-Quds reported that the Palestinian National Council welcomed the European Union (EU) parliamentarians’ call for the EU to suspend its partnership agreement with Israel.

Covering Israeli Prime Minister Benjamin Netanyahu’s relentless efforts to secure his coalition, al-Quds reported that the new coalition deal between the Likud and the Jewish Home parties will end up intensifying Israeli settlement construction across the West Bank.

Al-Ayyam and al-Hayat al-Jadida reported in this regard that Netanyahu has asked the Knesset to allow him to boost the number of ministers in his new government.

Al-Quds reported that dozens of residents and families of Palestinians who were deported from Bethlehem to Gaza in 2002 after taking refuge in the Church of the Nativity, held a march in solidarity with the deportees in Manager Square.

Al-Hayat al-Jadida reported that the deportees themselves called for ending their forced exile in Gaza and allow them to return to their families’ houses.

Al-Ayyam also reported that Ethiopian Israelis have threatened to return to streets if Israeli authorities do not meet their demands and drop charges against protesters arrested in Tel Aviv during the previous week.