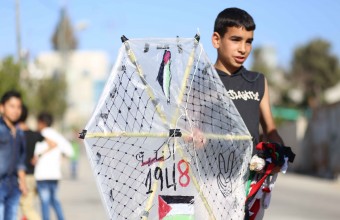 Alrowwad Cultural & Theatre Society, today, organized a march commemorating the 67th anniversary of the Nakba. The group, mainly consisting of young people, marched from the Alrowwad centre in Aida Camp to the Jerusalem-Hebron Road, where it was stopped from going further by PA troops.

PNN reports that 16-year-old Ahmed,, from Aida Camp, expressed his anger at the PA intervention, while other members of the march burned an Israeli flag and chanted towards the Israeli base from a distance.

Lajee Centre in Aida Camp also arranged a peaceful protest action to commemorate the Nakba. As has been done for the last six years, children from the camp made kites, many from Palestinian flags, to fly at the gate to Rachel’s Tomb. PA troops were also present.

Salah Ajarma of the Lajee Centre said that the kites represented freedom, and that there was no better way of expressing the freedom yearned for by the Palestinians was through the flying of these. 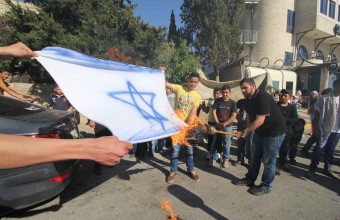