67 Torches Light the Streets of Ramallah 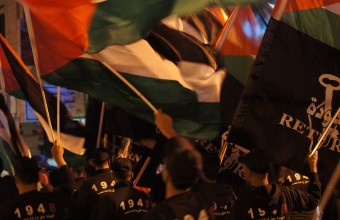 A march was organized, Thursday evening in Ramallah, where 67 torches, 67 keys, 67 Palestinian flags and 67 black flags were held high in remembrance of Nakba 1948.The streets were packed with people surrounding the demonstrators, who made their way through central Ramallah in circles from Arafat square to Al-Manara and back, according to the Palestinian News Network (PNN).

The march was carefully choreographed with Palestinian and Nakba flags in the front followed by a uniformed orchestra in the centre and torches rearmost.

Behind the event stood the Higher Coordinating Commission to Commemorate the Anniversary of Nakba. According to Commission member Omar Assaf, the activities this year have two main messages. The first is the right of return and the second is the Palestinian internal unity.

The Commission also held a march on Wednesday from the tomb of late Palestinian President Yasser Arafat to Arafat Square where a central ceremony was held and Arab Idol-star Haythem Khaleily was giving concert.

On Friday, sirens of mourning will be blared at 12 pm as an expression of mourning on the losses of the Palestinian people. In addition, a march will be launched near the Apartheid Wall in Nelain town, near Ramallah.