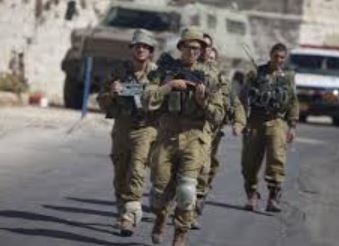 His brother, Nasser Hammad, said the soldiers surrounded their home approximately at 2 after midnight, and tried to detonate the main door, but the family noticed them and instantly opened the door.

Nasser added that the soldiers violently searched the property, and used military dogs in the search, causing the children to suffer anxiety attacks.

As the soldiers were leaving the property, an army officer told the family their son “will be tortured, and will be unable to differentiate between night and day.”

Hammad was imprisoned by Israel twice before, and was previously shot and injured by live Israeli fire; he still suffers complications resulting from his injury.

In Bethlehem, several army vehicles invaded the al-Obeydiyya town, east of the city, and handed one Palestinian identified as Omar Hasasna, 26, a military order for interrogation in the Etzion military base.

Furthermore, soldiers invaded homes in the al-‘Isawiyya town, in occupied Jerusalem, and kidnapped two Palestinians, after violently searching their homes.

The two, Shadi ‘Oleyyan and Mohammad Saleh Mahmoud, were moved to an interrogation facility in the occupied city.

The Israeli army said two of the arrested Palestinians are members of the Hamas movement.

Also on Sunday at dawn, a number of vehicles invaded Sanour village, south of the northern West Bank city of Jenin, and handed Eyad Fathi ‘Ayasa, 39, an order for interrogation in the nearby Salem security and military base.

Soldiers also invaded a number of homes in the village, searched them, and interrogated several Palestinians.
Late on Saturday at night, soldiers invaded Kufur ‘Aqab and Samiramis neighborhoods, north of occupied Jerusalem, and clashed with dozens of local youths.

The army also invaded a home belonging to members of the Abu Romeila family, and violently searched it.