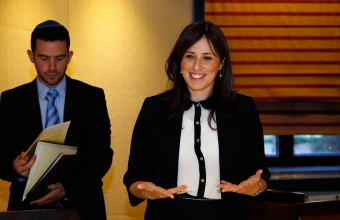 ‘The whole land of Israel belongs to the Jews”, said the new Deputy Minister of Foreign Affairs Tzipi Hotovely of the new coalition government led by Benjamin Netanyahu, during a meeting with Israeli diplomats.According to the PNN, Hotevely quoted Rashi as support to her arguments, a medieval commentator of the Torah that holds that if someone says that Israel has taken possession of the land that once belonged to others, Jews have to answer that the Old Testament says that the land belongs to God alone, and he has decided to offer it to the Jews.

Hotovely, who claims Orthodox Jewish heritage, 36-year-old, former deputy minister of transport in the previous government, belongs to the generation of young extremists of the Likud, the party of the Prime Minister, who argues the need to build new settlements in the West Bank and oppose any territorial waiver in favor of the Palestinians. ‘This country is ours, all of it. We did not come here to apologize for that, ‘the deputy minister stressed. Many diplomats have expressed dismay at the fact that the Bible has been cited to address diplomatic issues.

‘It’s the first time someone has asked us to use the verses of the Torah to make diplomacy’, diplomats reported to Israeli media. On May 20, during a meeting with Federica Mogherini, the High Representative for EU foreign policy, Tzipi Hotovely had argued that peace talks have failed when the Palestinian Authority has decided to break off negotiations and that the Palestinians must ‘stop chasing unilateral measures against Israel in the international arena.’

Netanyahu: Talmud Will be the Basis of Israeli Law