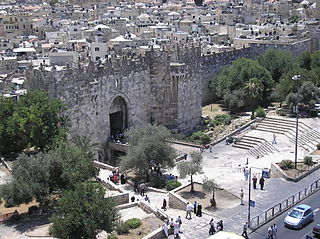 Israeli sources have reported on Saturday at night that two Israeli teens were stabbed near the Damascus Gate, in the Old City of occupied Jerusalem, and suffered moderate-but-stable injuries.
Israeli Jerusalem Post has reported that medics arrived on the and provided first aid to the two 17-year-old teens, before moving them to the Hadassah Ein Karem Hospital, in Jerusalem, suffering injuries to their upper bodies.
The newspaper also reported that the two were on their way to a study session at the Western Wall, marking the Shavuot Jewish holiday.

The Israeli Police said they arrested a 19-year-old Palestinian teen from his home in the Old City of Jerusalem and moved him to an interrogation center; the police said the teen “was caught on a surveillance camera,” but did not provide any further information.

On Wednesday, May 20, Israeli police shot and killed a Palestinian man after he allegedly rammed two officers with his vehicle.

His family denied the Israeli allegations, and said he is a father of five children (Rasha 14, Hamza 11, Raghad, 9, Hala, 6, and Mohammad, only 14 months of age); and he was planning to take his family on a trip to Turkey, but the accident with the officers landed him in prison with a potential life sentence.