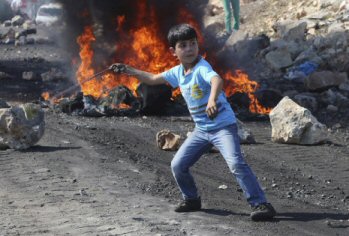 Israeli Minister Ayelet Shaked has proposed a sentence of 20 years in prison for Palestinian boys throwing stones at Israeli forces, reports Days of Palestine.Israeli newspaper Yedioth Ahronoth reported, Thursday, that Shaked is promoting legislation aimed at giving harsher punishment to stone-throwers, without having to provide proof the accused intended to harm anyone.

Shaked’s first piece of legislation since entering the Justice Ministry will be brought to vote on Sunday, at the Ministerial Committee for Legislation.

About a thousand indictments are served every year against stone-throwers, but the difficulty in proving the rioter’s intent to cause damage is, in many cases, a factor in the minor penalties given, if at all.

Shaked plans to add a new kind of offense to the law, which would prohibit the throwing of a stone or an object not only with the intention to cause harm, but also in order to interfere with or impede a police officer from performing his duties.

PNN further reports that, in addition, Shaked’s proposal would expand the law against rock throwing to expand punishments for individuals who throw rocks at police or police vehicles. Such attacks would be subject to a special penalty and harsher punishments would be imposed.

A new threshold will be set that does not require proving intent to cause harm, and the punishment for such an offense will be up to 20 years in prison.

Shaked, from the Jewish Home party, called for the murder and genocide of the Palestinian people the past summer, including mothers and children.

During the 51-day Israeli attack on Gaza, which killed more that 2,200 people, mostly children and civilians, Shaked was quoted to say: ‘Palestinians are all enemy combatants. This also includes the mothers of the martyrs; they should follow their sons, nothing would be more just.’