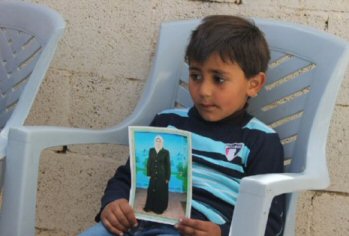 Palestinian mother of six children, wife of prisoner, sister of three prisoners Samaher Zeineddin has now entered her 2nd year in prison, without charge.Samaher, age 35, the mother of six children aged between four and 14 years, is also suffering unknown disease in the chest, a statement issued on Saturday by Palestinian Prisoners’ Centre for Studies (PPCS) said.

After much pressure put by the female prisoners on the Israeli prison services, Samaher undergone a surgical operation, but her suffering remained unchanged, according to the statement.

The PPCS said, according to Days of Palestine, that Samaher was arrested on May 28, 2014, when the Israeli occupation forces stormed her house in Nablus during the night, frightened her children, inspected her house and arrested her.

Until today, the statement said, she was not charged or given any sentence. The Israeli occupation has not yet given any reason for keeping her in custody.

Samaher always feels painful and worried about her six children, whom she has not met since she was arrested.

Her husband Nader, 37, was arrested just two months before her. Three of her brothers are behind Israeli bars, one of them is serving a life sentence.

All her six children are living with their grandmother; an old woman with several diseases. She has been unable to offer them proper service, in addition to not havig a source of income.

Female prisoners with Samaher told the PPCS that she always feels painful and worried about her six children, whoة she has not met since she was arrested.

The PPCS said that she is experiencing very difficult conditions inside the Israeli prisons and called for the international community and the human rights organisations to put pressure on the Israeli occupation in order to release her.