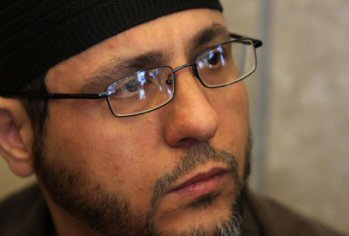 Israeli Prison Services, on Sunday, put Palestinian detainee Abdulla al-Barghouti in solitary confinement after he gave a radio interview.Israeli troops were ordered by prison services to storm Al-Barghouti’s cell in Rimon Prison after he had given a mobile interview for a Gaza-based radio station.

Al-Barghouti, who is spending a 67 life terms, was sent to a solitary confinement and will face trial for conducting the interview, a spokeswoman of the Israeli army said.

According to Days of Palestine, prison officers searched the prison cell to find the mobile, but they could not find it. Israeli officials were astonished to know that he had an interview without their knowledge.

In his interview, Al-Barghouti addressed Hamas leaders not to hasten their negotiations regarding a potential prisoner swap.

He called for a very good swap, telling them that he and the other prisoners are able to wait until such a swap ripens quietly.

“Do not hasten, because we are firm and perseverant,” he said. “We will not change and we shall remain firm regardless of whether we are released today or after a thousand years.”

Responding to his remarks, Abu-Obaida, the spokesman of Hamas’ military wing Al-Qassam Brigades, said: “Freeing you [Al-Barghouthi] and the other prisoners is a matter of time and the jailers are going to vanish soon.”

Al-Barghouthi was taken by Israeli forces in 2003. He is spending 67 life terms over claims that he had killed Israelis.