Thoughts on Normalisation in the Israel-Palestine Conflict 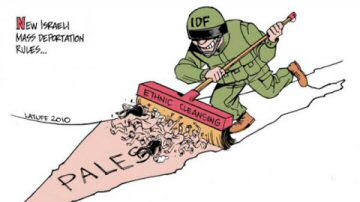 What is normalisation and why is it so damaging to achieving justice?Anyone with any exposure to the Palestinian-Israeli conflict will also be exposed to certain oft-repeated words and phrases that are woven through it like threads – or which are deployed around it like firecrackers. These words become markers, signals, and judgments. They are written and spoken all the time, but not always clearly defined – despite being among the most important ideas to truly understand.

One such word is normalisation. When actors in the Palestinian struggle for a just peace use this term, what do they mean? What is the reasoning behind a refusal to work with an individual or group because of a “normalising” attitude or act? And why is normalisation so damaging to achieving justice?

In order to clarify this goal – justice – it’s also important to clarify normalisation. I’d like to start with a straightforward definition of normalisation as expressed by the first Palestinian BDS (boycott, divestment, sanctions) conference, held in Ramallah in November 2007:

“Normalisation means to participate in any project or initiative or activity, local or international, specifically designed for gathering (either directly or indirectly) Palestinians (and/or Arabs) and Israelis, whether individuals or institutions; that does not explicitly aim to expose and resist the occupation and all forms of discrimination and oppression against the Palestinian people.”

This definition can take many forms in daily life. Among the important ones are succinctly defined in a document published by the Ma’an Development Center of Ramallah.

1. “Projects that do not agree on inalienable rights for Palestinians under international law and the conditions of justice,”

2. “Projects implying equity between Israelis and the Palestinians in the responsibility for the conflict, or that claim that peace is achieved through dialogue and understanding and increased cooperation between both sides, without achieving justice,”

3. “Projects that hide the situation of the Palestinian people as victims of the Israeli colonial project,”

4. “Projects that refuse, ignore or dilute the right of the Palestinian people to self-determination, the right of return and compensation according to the UN resolution No. 194,” and

5. “Projects supported by or in partnership with the Israeli institutions that do not recognize the legitimate rights of the Palestinian people or projects receiving support or funding (in part or in whole) from the Israeli government such as cinema festivals, information technology exhibitions, etc.”

To me, the second kind of normalisation – implying equity between Israelis and the Palestinians in the responsibility for the conflict, or claim that peace is achieved through dialogue and understanding…without achieving justice – is among the most important to understand. Indeed, it is among the subtle, the most common, the most liable to be hidden under the trappings of good intentions – and, therefore, among the most difficult to stop.

Politicians are not the only ones who commit normalisation when it comes to the Israeli occupation. Newspapers do it, television does it, filmmakers and artists and pop singers do it, ordinary people talking politics over dinner do it. Language does it. Normalisation is the process, the instinct, the narrative that neutralises what can never be neutral, that renders over six decades of meticulously institutionalized Israeli military rule into an eternal and incorrigible spat between two groups of people who “can’t get along”.

If only the Palestinians would just stop throwing rocks! If only the Israelis would just stop building settlements for a few weeks! Then the talking could begin; then peace would be just around the corner. This is the belief that lies below the surface of even the most well-meaning normalisation. Let’s negotiate; let’s send rock bands to Tel Aviv as long as they go to Ramallah too; let’s send our children to summertime peace camps in the United States. Let’s do everything we can to domesticate anger, to level the scales by holding one of them down by force, to position Israelis and Palestinians (civilians, politicians, jazz musicians, whomever they may be) in a “dialogue” that disregards the fact that Palestinian civilians live without even most basic human rights; that Palestinian national politicians do not represent any actual nation; that Palestinian jazz musician cannot cross their checkpoint of choice in order to play where they please.

As the saying goes, only free men can negotiate. Normalisation is what makes them do it anyway.

This is crucial: normalisation prevents us from calling a spade a spade, from defining our reality as it is. If we cannot do that, we are lost.

To call it a spade, then – to deny the denial of our rights, and to demand those rights – we as Palestinian civil society organizations and as Palestinians in general must refuse to participate in this process that reduces us. In other words, we must refuse to participate in activities or collaborations with groups or individuals who perpetuate acts or atmospheres of normalisation. One important manifestation of this philosophy is the global BDS campaign, which is by definition a struggle against normalisation. I’d like address the BDS campaign further in this context: both the campaign itself and the importance of its opposition to normalisation, and the criticisms such a strategy often attracts.

The global BDS campaign calls upon us to boycott – to refuse normalisation – with the full range of injustices perpetrated by the state of Israel against Palestinians. The Israeli occupation restricts the entirety of our rights, not only the ones you can exercise in a court or a voting booth: it affects our economy, our education, our mobility, our language, our health, and our hope. It constitutes the geographic, economic, political, social, spiritual, and psychological fragmentation of Palestinian communities and lives. There is nothing remotely normal about any of this. To dismiss injustice and inequality only in name – while continuing to fund Israeli companies or buy Israeli products or play a concert in an Israeli hall because to do so seems logistically convenient or ethically uncomplicated – misses the point altogether. The BDS campaign is a reminder that the Israeli occupation is an enormous and intricate apparatus that can only change if we refuse to support it. Which is to say, if we refuse to normalise with it.

Both within the Israeli community and around the world, there exists a great deal of discomfort and confusion about the tactics and intentions of anti-normalisation work. Many people find the BDS campaign, among others, to be “imbalanced” or overly punitive; many believe the Palestinians should “dialogue” with the Israelis about what’s happening in the oPt, because the problem is just a lack of information and mutual understanding; many believe that only a “positive” approach will do, and BDS doesn’t qualify.

Unfortunately, these claims are not only patronizing and ineffectual, but also irrelevant. There is nothing ‘positive’ about sixty-three years of land appropriation, expulsion, military violence, and systematic human rights violations. Nor is there anything “positive” in the way the Israeli state responds to dissent: targeted arrests, military brutality at nonviolent protests, blacklisting human rights organizations, the deportation of activists. The goal of ‘balanced dialogue’ is impossible in a place where there is no balance, a place of forced silence. In short, it is absurd and offensive to advocate for ‘positive engagement’ with an apartheid state, to “convince” it to be more empathic with the people it subjugates, to construe the ultimate goal as “mutual understanding” rather than an end to oppression itself.

The BDS campaign, then, is the only way for the Israeli community – and the world – to truly see, experience, and know what their government is doing in Palestine. Our responsibilities to the truth, both as Palestinians and Israelis, are both collective and deeply personal; anti-normalisation work is a way to honour and act upon those responsibilities. It is powerful – and powerfully nonviolent – resistance, with human solidarity as a tactic as well as a goal.

Let us remember that normalcy without honesty is meaningless, as is cooperation without justice. Let us care so deeply about our capacity for change that we will refuse to undermine ourselves, and each other, along the way.

Rifat Odeh Kassis is a Palestinian intellectual, activist and board member of the Alternative Information Center (AIC).

See also: Why Americans Are ‘Deranged About Palestine’ and What To Do About It