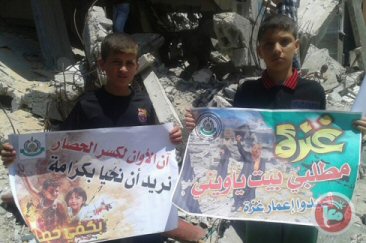 Hamas, on Friday, organized a march in Jabaliya refugee camp, in the northern Gaza Strip, to protest the national unity government‘s alleged neglect of the coastal enclave, as well as policies of the UN agency for Palestinian refugees, UNRWA.According to Ma’an News Agency, the march set off from mosques across the refugee camp following Friday prayers, and ended at a home destroyed during last summer’s Israeli offensive on Gaza.

Hamas leader Muhammad Abu Askar said before the march that that while the unity government had been formed to serve all Palestinians, one year on the situation in Gaza is continuing to worsen.

‘Hamdallah’s government prevented employment in Gaza, and today UNRWA has stopped hiring and is shrinking its services for refugees and those who were affected by the war.’

UNWRA, the largest service provider for refugees in the Gaza Strip, announced in February that it had been forced to stop a cash assistance program for tens of thousands of Palestinians to make repairs to damaged and destroyed homes due to a lack of donor funding.

Abu Askar called on President Mahmoud Abbas and UNRWA to uphold their responsibilities to Palestinians in Gaza, calling on UNRWA to take a neutral side and support those living in the beleaguered coastal enclave.

He also used the march to welcomed Freedom Flotilla III, which intends to arrive at the Gaza Strip with a limited cargo of supplies.

The flotilla will be the third of its kind to attempt to break ‘the illegal and inhumane blockade of the Gaza Strip,’ according to the Freedom Flotilla Coalition.