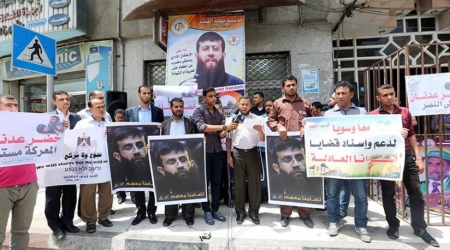 Al Ray Palestinian media network organized, on Sunday morning, a solidarity protest with political detainees on hunger strike in Israeli jails, with special note to Khader Adnan and Abdullah Barghouti..Participants raised slogans demanding the release of detainees, after which many of them wore prisoners’ clothing to reflect their suffering.

Director of Al Ray Ismail Althawabtah said, during the protest, that, ‘We in Al Ray Palestinian network stand by Palestinian prisoners in Israeli jails, especially those on hunger strike.’

He held the Israeli occupation fully responsibile for the lives of prisoners on hunger strike and the lives of Khader Adnan, Abdullah Barghouti, and all other prisoners, as well, and the condemned ongoing repression and racist Israeli policies against the prisoners.

He called on the Arab League to take serious actions against the Israeli occupation and to work very hard in order to internationalize this humanitarian issue.

Since 1967, when Israel occupied the West Bank, Gaza Strip and East Jerusalem, more than 650,000 Palestinians have been detained by Israel. This represents approximately 20% of the total population in the Occupied Palestinian Territories , and 40% of all males.

Despite prohibition by international law, Israel detains Palestinians in prisons throughout Israel, often without charge or trial, and far from their families, who almost never obtain the necessary permits to leave the Occupied Palestinian Territories to visit them.

There are an estimated 6,800 Palestinian prisoners being held in Israel, of which 10 are members of the Palestinian Legislative Council (PLC).