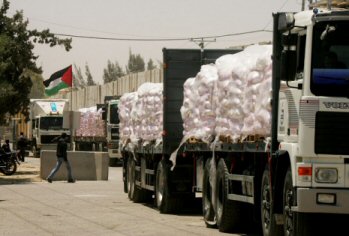 Israeli authorities, on Monday, closed Erez and Kerem Shalom border crossings into Gaza, citing “security reasons”.Only few hundred truckloads of aid at a time and a very few number of passengers, mainly patients, are ever allowed into and out of the Gaza Strip, Days of Palestine reports.

The closure came shortly after Israeli airstrikes hit several targets in the coastal enclave, following a rocket attack on Saturday night that an extremist Salafi group, widely alleged to have been concocted by Israeli and US intelligence, claimed responsibility for. No injuries were reported on either side.

The Palestinian Authority’s director of border crossings, Nathmi Muhanna, confirmed that occupation authorities had notified them on Sunday morning of their decision to close the crossings.

The Kerem Shalom commercial terminal normally operates five days a week, Sunday to Thursday, and closes on the weekend, Friday and Saturday.

Even when the crossings are open, however, movement of goods and people is severely restricted as part of a crippling Israeli military blockade in place since 2007.

See: Salafists to Continue Firing on Israel if Hamas Does not Halt Crackdown