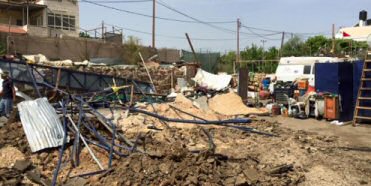 The West Jerusalem municipality, on Tuesday, issued orders to demolish industrial facilities for Palestinians in Al-Jeeb town, northwest Jerusalem, under the pretext of no building permit.PNN sources say that soldiers broke into the neighborhood at 6:30 AM and began the demolition process of three facilities, including two garages and a blacksmith workshop belonging to Jerusalemite families.

Locals said that the neighborhood was inhibited by almost 900 Palestinians. They added that they are always harassed and threatened with home demolitions, since they are surrounded by a number of continuously expanding settlements, such as Giv’at Ze’ev and Giv’on, narrowing the living spaces for Palestinians.

Last week, Israeli forces destroyed three family homes, two of them under construction in the town of Silwan south of al-Aqsa mosque and the third in Salah Eddin street in occupied Jerusalem, under the pretext of a lack of a building permit.