Palestinian Kids Bring Their Cause to Cambridge 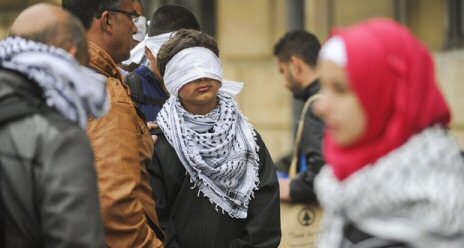 Palestinian children and teenagers visiting Britain held a demonstration, yesterday, rallying against Palestinian child imprisonment by Israel in the West Bank and Israel.Cambridge news reported that the children were given a tour of King’s College, Cambridge, before leading a march through the city’s streets. They wore blindfolds and shackles during their march in order to raise awareness of the horrific circumstances many Palestinian detainees, including children, suffer through.

One of the children (16) told his story of being shot by Israeli Occupation Forces (IOF) on his way home from school. Another (13) has a friend who was arrested at a protest and detained for 2 months without charge or trial.

According to the PNN, there are currently 182 Palestinian minors locked up in Israeli jails, including 26 minors below the age of 16.

Meanwhile, Israel was dropped yesterday from a UN list of children’s rights violators, despite evidence presented to the UN concerning Israeli violations during the 2014 Israeli assault on Gaza. During this assault, 535 Palestinian children were killed, 3374 wounded and approximately 1000 left permanently disabled.

The visit to Cambridge was organised by human rights charity Camden Abu Dis Friendship Association (CADFA) and funded by Erasmus and the European Union (EU).

One of the organisers, Pamela Manning, said: “There is nothing like meeting and talking for breaking down preconceived opinions and for the Palestinians the fact that some of us are listening might just reduce the violence.”

The group’s visit will end with a series of public events in London later this week.

DCI: “UN Shields Israel From Accountability For Atrocities Against Children”

‘We Bombed Civilians for Entertainment.’