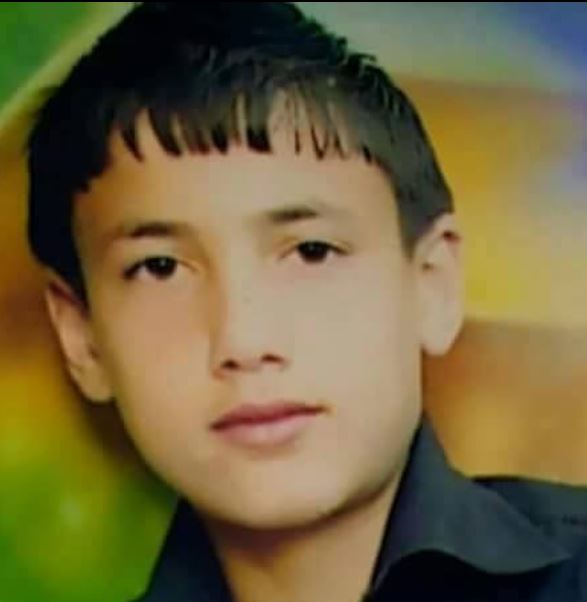 Amer Ba’jawi is 14 years-old Palestinian child, a pupil of the seventh grade from the village of Ya’bad near Jenin in the northern part of the West Bank, is the youngest detainee in Israeli prisons and detention centers, the Palestinian Prisoners Society (PPS) said. His father Abed Ba’jawi – who himself was repeated imprisoned the army – said that soldiers of a nearby watch tower arrested Amer on May 23rd, along with his friend ‘Sanad Masharqah,’ 16 years of age.

Both were taken to Huwwara military camp near Nablus, where they were held three days, before the army moved them to the ‘Mageddo’ detention facility.

The Israeli military prosecution filed charges against both children.

The charges include “infiltrating a military watch and causing damage,” in addition to “endangering soldiers’ lives,’ and “throwing stones towards a vehicle of an Israeli settler, endangering his life as well.”

The charges were made during a military court hearing last Tuesday June 9.

Abed Ba’jawi said his child was brought into the courtroom handcuffed, and wearing prison clothes.

He added that, as a father, seeing his son in such conditions, he asked the military judge, whether it was ‘humane or rational to indict a child with ridiculous charges,’ or ‘to treat children with this level of brutality,’ but he was expelled out of the courtroom.

The Israeli military court will be holding another hearing on July 28.

The Palestinian Prisoners Society said there are about 300 children in the Israeli detention facilities.

PPS head, Qaddoura Fares, called upon the international community to practice pressure on the Israeli authorities to comply with, and respect, International Laws and the Geneva Convention.

Fares added that Amer, and all other children held in the Israeli prisons, must be immediately released, and demanded an end to Israel’s abuse of the detainees, especially the children.