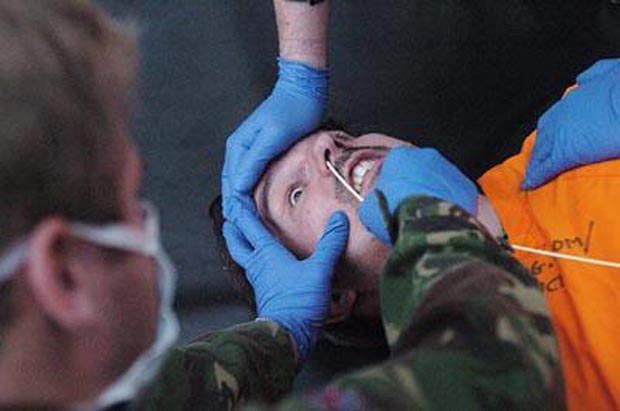 As numerous Palestinian prisoners are engaged in hunger strikes right now, vowing to continue until death, the Israeli cabinet decided on Sunday to allow prison officials to forcefeed the prisoners.The practice of forcefeeding is considered torture under international law, but is practiced by the United States in its POW camp in Guantanamo Bay, Cuba, and by several other despotic regimes around the world.

The Israeli Medical Association, however, came out against the bill, stating that they will advise their doctors not to enforce the bill if it is passed through the Knesset. The Head of the Association wrote a letter stating that this law ‘contradicts and is in opposition to the standards of medical ethics accepted in Israel and by the entire world, and could almost certainly place doctors in the near-future in difficult and dangerous dilemmas.’

The law, known as the ‘Law to Prevent Harm Caused by Hunger Strikes’, will now pass to the Knesset (Parliament) for approval – but is expected to pass, given the current makeup of the Israeli Knesset.

Some amendments to the bill, which were meant to lessen its impact, were not included in the final version.

The bill will authorize prison authorities to tie down hunger-striking prisoners, force tubes down their throats and inject fluids. This practice frequently results in vomiting and asphyxiation, and can take several hours to complete.

The minister who introduced the law, Public Security Minister Gilad Erdan, called the new wave of Palestinian hunger strikes ‘a new type of suicide terrorist attack through which [the hunger-striking prisoners] will threaten the State of Israel. ‘

There are dozens of Palestinian prisoners on hunger strike in Israeli prison camps right now, with several of them near death. Islam Hamed has reached more than 60 days of hunger striking, while Khader Adnan has been on hunger strike for 41 days.

They are demanding that Israel stop the practice of holding Palestinians without charges, often for years on end. These so-called ‘administrative detentions’ offer no chance for a trial, and no chance for the imprisoned Palestinian to know why they are being held.