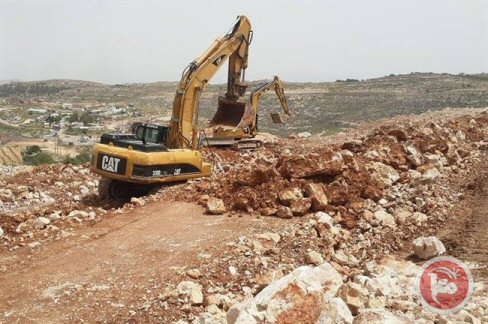 The bulldozers then blocked off the area with mounds of earth and cement blocks. No explanation was given for the action.

According to the Applied Research Institute of Jerusalem, about 55 percent of Beit Furik’s village lands are classified Area C, giving Israel full military and civil control.

Across the village, a 2014 report by ARIJ says, ‘hundreds of dunams of land belonging to Beit Furik town have been confiscated by the Israeli authorities, primarily for the purpose of establishing settlements, military bases and the construction of Israeli settlement roads.’

However, the report particularly highlights difficulties faced by Khirbet Tana, writing: ‘This community has been subjected to increased harassment and human rights violations by the occupation authorities stationed in Nablus.’

The community, which comprises around 40 houses, mainly tents and houses made of tin, has been demolished by Israeli forces ‘ several times between 2005 and 2011.’

The report adds: ‘Khirbet Tana has a severe lack of basic services such as water infrastructure, electricity, roads and communications.

‘Despite this, Khirbet Tana community members have rebuilt their homes each time they have been demolished and have remained in their community.’