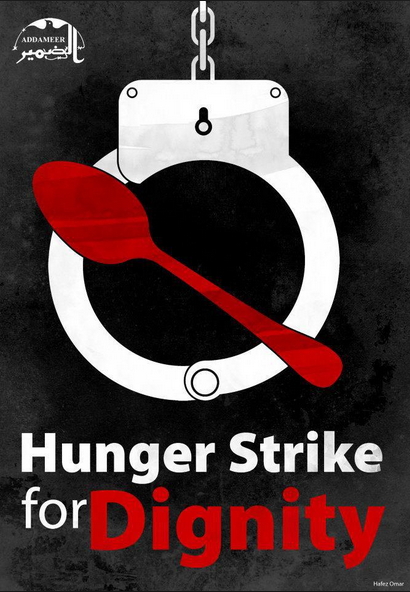 The Palestinian Detainees’ Committee strongly denounced, Sunday, the Israeli approval of a bill that would allow force-feeding Palestinian detainees, holding hunger strikes, and described it as a serious violation against the detainees, and their basic rights.Israeli Internal Security Minister Gilad Erdan, presented the bill Sunday, and said the striking detainees “pose a threat to Israel.”

Erdan stated that hunger-striking detainees, which he labeled as “terrorists,” became “a means to threaten Israel, alongside boycotting Israel and its products.”

He added that movements leading the call for Boycott, Divestment and Sanctions, “aim at delegitimizing Israel,” and considered BDS alongside hunger strikes, to be “a real threat to Israel.”

Before it becomes a law, the approved bill needs to be sent to the Israeli Knesset for first and second readings.

It is worth mentioning that the bill was first presented to the Israeli government last year, and managed to pass, but the Israeli Knesset was dissolved before it even started deliberations to turn it into law.

It was sent to the government after its initial approval in June 2014, when hundreds of Palestinian political prisoners held an extended hunger strike, demanding basic rights, guaranteed by International Law.

The strike caused at least eighty Palestinian detainees to fall seriously ill, and were moved to Israeli hospitals.

The Palestinian Detainees Committee expressed its deep concerns over the outcomes of this illegal bill, and said “the law brings to mind the cases of detainees Ali al-Ja’bary, Ishaq Maragha and Rasem Halawa, who were killed in the early 1980’s, after the Israeli authorities force-fed them in an attempt to end their hunger strike.”

“The time has come to put an end to the Israeli insanity, cruelty and immorality,” the committee said in a press release, “We have seen a series of laws and drafts that are practically call for killing the detainees, in addition to laws meant to continuously abuse their rights even after their release.”

It called on local, regional and international human rights groups, and the international community, to end their deadly silence, and to act on prosecuting Israeli officials, such as Avigdor Lieberman, Gilad Erdan and many others “for their calls to murder the detainees.”

The Israeli Association for Civil Rights said force-feeding the detainees is forbidden, and that when the detainees conduct hunger strikes, they are practicing a legitimate right to object to injustice.

It added that most detainees who conduct hunger strikes in Israeli prisons and detention centers are largely imprisoned under Administrative Detention orders, held usually for renewable six-month periods, without facing any charges.

The Palestinian Authority also called for ending the escalating Israeli violations against the Palestinian detainees, and said they have the right to express their rejection to the outrageous abuse, and injustice, they constantly face.