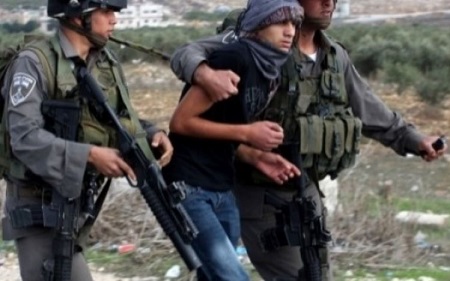 Israeli soldiers kidnapped, late on Sunday at night and earlier on Monday, twelve Palestinians, in different parts of the occupied West Bank, including occupied Jerusalem, searched scores of homes, and installed roadblocks near the southern West Bank city of Hebron.Media sources in Hebron, in the southern part of the occupied West Bank, said the soldiers kidnapped Islam Ahmad Mheisin, 18 years of age, after invading his home in the al-‘Arroub refugee camp, north of Hebron.

The PPS added that al-Karaki was previously kidnapped, and imprisoned, three times.

In addition, soldiers invaded Yatta and the ath-Thaheriyya nearby towns, and installed roadblocks on Hebron’s northern entrances, in addition to the main road leading to Sa’ir town, northeast of Hebron, before stopping and searching dozens of cars while investigating the ID cards of the passengers.

The kidnapped Palestinian is a student of the Najah National University in Nablus.

In Bethlehem, soldiers invaded Teqoua’ town, east of the city, and kidnapped three Palestinians, including two brothers, after breaking into their homes and searching them.

The kidnapped have been identified as Shadi Mohammad Hajahja, 27, his brother Morad, 20, and Firas ‘Adnan al-Badan, 20 years of age.

Residents Bashar Mahmoud, Nassim Mheisin and Mohammad Mousa Mustafa, were all taken prisoner from their homes, in the al-‘Isawiyya town, after the soldiers stormed their homes, and violently searched them.

Soldiers also kidnapped a former political prisoner, identified as Suheib al-A’war, 18, from Ein al-Louza neighborhood, in Silwan town in Jerusalem, after violently attacking and beating him.

The kidnapped Palestinian is a former political prisoner who spent 21 months in Israeli prison, and was released earlier this year.

On Sunday at night, soldiers kidnapped Tareq Ziad Abu Tabeekh, 19 years of age, for “entering Israel without a permit.” The kidnapped is from the Jenin refugee camp, in the northern West Bank district of Jenin.