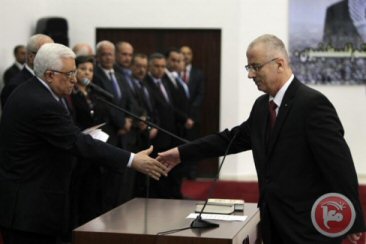 Discussions to form a new government would include consultations with the various Palestinian factions, including Hamas, he said.

Abbas’ spokesman Nabil Abu Rudeineh, however, told the official PA news agency WAFA that Hamdallah had not handed in his resignation.

Officials have said the planned dissolution of the government, made up of technocrats, had been under discussion for several months because of the cabinet’s inability to operate in the Hamas-dominated Gaza Strip.
Both Hamas and Islamic Jihad have condemned the unilateral dissolution of the government, a decision they say they were not consulted over.

‘No one told us anything about any decision to change and no one consulted with us about any change in the unity government. Fateh acted on its own in all regards,’ Hamas spokesman Sami Abu Zuhri told AFP Wednesday.

Before the official resignation, a PLO official said, ‘The government will continue to function until we have a new one.

‘I think what’s coming now is the formation of a government with politicians, not a government of technocrats.’

‘At the end of the day it’s not going to change anyway our position when it comes to peace and our commitment towards peace with Israel, our responsibility regionally and internationally fighting terrorism,’ he said during a visit to Prague.

‘Rest assured that whatever change will take place is not going to hinder our commitments regionally or internationally.’

The move comes at a critical time, with Hamas sources reporting the group is holding separate, indirect talks with Israel on ways to firm up an informal ceasefire agreement that took hold last August, ending the 50-day war in Gaza.

It was not clear whether Abbas’s move to dissolve the government was linked to those talks, but the PLO official said he believed that they played a role.

‘If you end up having a different kind of status for Gaza, then basically the idea of a Palestinian state completely disappears,’ the official said.

Another high-ranking Hamas official said he believed Abbas decided to act after receiving word of the indirect contacts.

‘When Mahmoud Abbas heard of international envoys taking part in talks to solve the (Gaza) crisis, it caught him off guard, then he took that decision,’ Bassem Naim told AFP.

‘He felt there was a possibility that a solution be found without the (Palestinian) Authority being involved.’
The indirect Hamas-Israel talks are said to have gone through a number of Arab and European channels.

A Hamas source said senior members of the Islamist movement had met in Doha over the weekend for talks with Qatari officials, although Hamas has so far denied reaching any type of long-term agreement with Israel thus far.

They focused on key issues for Hamas such as ending Israel’s blockade, now entering its ninth year, and the establishment of a sea passage between Gaza and the outside world, the source said.

He did not say whether other Palestinian factions were involved in the talks, such as Abbas’ Fateh movement, which was heavily involved in Egyptian-brokered talks that ended Gaza’s 2014 conflict.

An Abbas spokesman had said a truce that ended the suffering in Gaza would be welcomed, but added that it ‘must not have as its price a move away from the Palestinian and national consensus.’

The move to dissolve the government signals a fresh setback in efforts towards the Palestinian and national consensus, as the Palestinian leadership in the West Bank and Gaza Strip have struggled to maintain a unity government pieced together in June 2014.

The move initially materialized after Fateh and Hamas announced a national unity deal a few months prior in attempt to end seven years of political division between the largest two Palestinian parties and pave the way for general elections which haven’t been held since 2006.

See 04/29/15: No Real Sign of Reconciliation between Fateh and Hamas