Two Injured In Nablus, Two Kidnapped In Beta Nearby Town 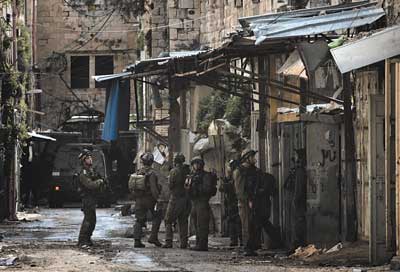 Israeli soldiers shot and injured, on Thursday at dawn, two Palestinians in the northern West Bank city of Nablus, and kidnapped two brothers in an invasion into Beta town, south of the city.Media sources in Nablus said several military vehicles, a number of settlers’ buses, and a military bulldozer, invaded the Eastern Area in Nablus, leading to clashes with local Palestinian youths.

Medical sources said resident Eyad Ma’in Kalbouna, 23, was shot with a live round in his left leg, while Mohammad Ghassan Hashshash, 24, from the Balata refugee camp, was shot with two live rounds in the chest and thigh.

The two have been moved to the Rafidia Governmental Hospital, in Nablus, suffering moderate-but-stable injuries.