New Unity Government in the Works 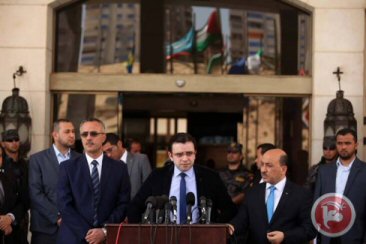 The PLO will discuss forming a new unity government next week, a Palestinian Authority spokesperson said Tuesday, after an announcement on June 16 that the consensus government formed last year would be dissolved.PA spokesman Ihab Bseiso told Ma’an News Agency that the national unity government has not yet resigned and will continue for another week until PLO Executive Committee members complete consultations with PLO factions concerning the structure of the new unity government.

Officials told Ma’an, Monda,y that Prime Minister Rami Hamdallah’s resignation was imminent, although it has yet to officially materialize.

The dissolution of the government was first announced on Tuesday last week at the 15th Fatah Revolutionary Council conference.

President Mahmoud Abbas reportedly said that a new unity cabinet would be formed rather than pursuing efforts to reform the existing government. He was reported to have said that the government would resign within 24 hours.

On Wednesday, an aide to president Mahmoud Abbas claimed that Prime Minister Rami Hamdallah had ‘handed his resignation to Abbas and Abbas ordered him to form a new government.’

However, Abbas’ spokesman, Nabil Abu Rudeineh, later told the official PA news agency Wafa that Hamdallah still had not handed in his resignation.

The unity government, consisting of politically independent technocrats, was formed in June 2014 in a bid to end division between the Fatah-led PLO and Hamas.

A year on, however, the political landscape remains deeply divided and the unity government has been unable to operate in the Hamas-dominated Gaza Strip.

While there has been talk of a government reshuffle for months, last week’s announcement suggested for the first time that a new government would have a completely different structure, with factional leaders replacing independent technocrats.

Both Hamas and Islamic Jihad condemned the announcement, which they said they had not been consulted over.

Palestinian officials suggested the dissolution may have come in response to reports that Hamas was holding indirect talks with Israel on a potential ceasefire agreement that could see Gaza given a separate status to the West Bank.