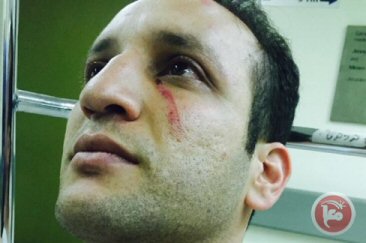 The settlers reportedly stopped his brother’s car and ‘after making sure he was an Arab,’ Ashraf said, they verbally abused him, physically assaulted him, and attempted to strangle him before fleeing the scene.
Ibrahim suffered from cuts and bruises in the face, chest, and neck.

Residents of Beit Hanina and other occupied East Jerusalem neighborhoods have faced an ongoing trend of increasing presence of Israeli settlers in Palestinian neighborhoods.

Takeover of Palestinian homes by Israeli settlers in the neighborhoods is part of an ongoing government policy aimed to maintain a Jewish majority in Jerusalem, by way of pushing Palestinians out of occupied East Jerusalem through home demolition, eviction, and other policies.

Saturday’s assault came after two Palestinians were displaced when their home was demolished in Beit Hanina last week for lack of Israeli-issued building permits. Such permits are difficult for Palestinian residents to obtain.

The UN Office for the Coordination of Humanitarian Affairs estimates that an average of four attacks by settlers on Palestinians have been carried out per week since the start of 2015.