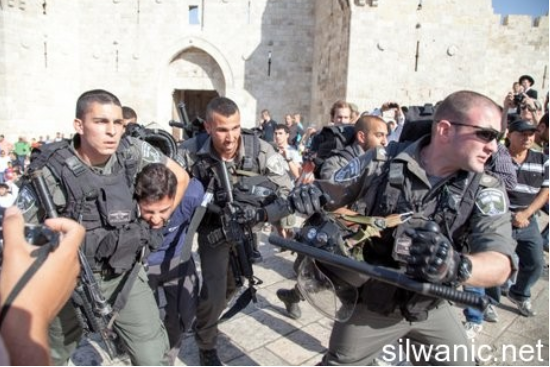 Awad said the undercover soldiers violently assaulted Ekhlayyel, causing him to bleed from his face and head.

The soldiers also attacked his brother, Nasr, 25 years of age, before leaving the town in a minibus that was parked at its main entrance.

Another Palestinian, identified as Tamer Suleiman Abu Ayyash, 22, from Beit Ummar, was taken prisoner on the al-Karama Border Crossing, while heading back home from Jordan.

Resident Jaber Thieb Tmeiza was kidnapped from his home in Ethna town, after the soldiers searched it and several nearby homes, belonging to family members.

Soldiers also kidnapped Khalil Khaled al-Ballassy, 22, and Abdul-Majid at-Teety, 25, from their homes in the al-‘Arroub refugee camp, north of Hebron.

Soldiers also invaded the al-‘Azza refugee camp, north of Bethlehem, and handed Fadi Jihad ‘Adawin, 22, a military warrant for interrogation in the Gush Etzion military and security base, south of Bethlehem.

In addition, soldiers kidnapped two Palestinians near the Karem Abu Salem (Kerem Shalom) Crossing, after crossing the border fence with Gaza, and took them to an unknown destination.