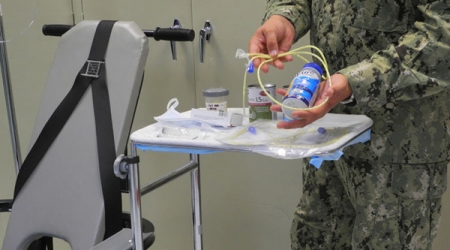 Israeli politicians have voted to continue work on a bill to allow hunger-striking Palestinian prisoners to be force-fed. Those who oppose it have argued that this is meant to silence convicts through torture similar to the force-feeding in Abu Ghraib and Guantanamo Bay.On Mondy night, the vote at the Knesset plenum passed with 53 in favor and 50 opposed. The controversial bill, which could be soon fast-tracked into law, would allow Israeli prisons commissioners to ask a court for an official permission to force-feed a prisoner when a doctor recommends doing so, should there be a risk of a grave deterioration in the prisoner’s health.

According to RT/Al Ray, the court, in its turn, will have to thoroughly analyze the mental state of the prisoner, the dangers of force-feeding via an enteral tube, as well as the prisoner’s postion on the matter, among other issues. If the request is given the green light by the court, the prisoner can be fed against his will, while a prison guard is allowed to resort to physical force to feed the prisoner.