3 Palestinians Assaulted by Settlers in Jerusalem 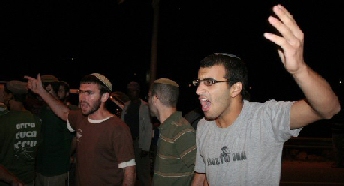 Extremist Israeli settlers, yesterday, chased down and assaulted 3 Palestinian workers on an-Anbiya Street in Jerusalem.According to WAFA/PNN, witnesses described seeing a group of illegal settlers running after the workers before catching up with them and physically assaulting them.

Israeli police then arrived at the scene of the crime and did nothing to the perpetrators of the attack but rather arrested two victims of the assault. The third was transferred to a nearby hospital for treatment.

This latest assault comes hours after a 14-year-old Jerusalem Palestinian sustained an injury to his eye during a vicious attack by settlers.

A woman was also injured three days ago when extremist settlers attacked her and her family as they waited in traffic. The settlers threw stones at the car, which led to the woman passenger sustaining light injuries.

See also: Palestinian Injured After Attack By Extremists In Jerusalem