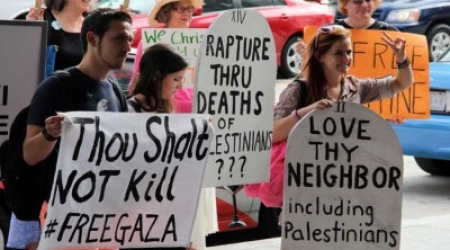 Members of Jewish Voice for Peace and Code Pink, Monday, organized a sit-in in Washington, to protest Israeli policy against Palestinians and its aggression against Gaza.The members of the two organizations, said Al Ray, rallied in front of the conference center in which the annual conference of Christians United for Israel group is held.

Protesters raised the Palestinian flag and banners reading ‘Free Palestine’, ‘End the occupation of Palestine’ and ‘Netanyahu is a war criminal’.

The members organized a minute of silence to honor Palestinian victims who were killed in the last Israeli aggression against Gaza.

The spokesperson of the protest noted that Israel has committed war crimes against Palestinians in Gaza, and criticized the tight Israeli siege on Gaza.