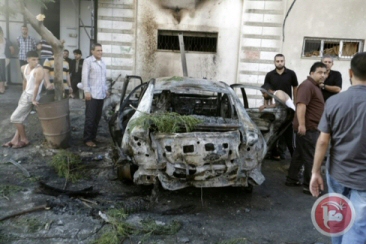 The Gaza Ministry of Interior said it arrested two suspects on Sunday, in relation to attacks on five vehicles belonging to the military wings of Hamas and the Islamic Jihad, the day before.A ministry spokesperson, Iyad al-Bazm, said the suspects were undergoing interrogation. He also added that the ministry would not allow any interruptions to peace and security in the Gaza Strip.

The five car bombs targeting the two military wings went off in near-simultaneous blasts on Sunday morning in the center of Gaza City and its northern neighborhood of Sheikh Radwan.

Witnesses said the explosions that went off at around 6:30 a.m. appeared to have been caused by bombs placed underneath the cars parked in front of their owners’ homes.

There were no reports of serious injuries.

Graffiti on a wall near one of the bombs reportedly read ‘Daesh,’ the Arabic acronym for the Islamic State group (IS), although no group has claimed responsibility for the attacks.

The explosions appeared to be intended as a warning rather than an attempt to inflict casualties given the early hour, as has occurred with previous incidents.

Since last summer’s devastating war in Gaza, there have been growing signs of internal unrest between Hamas security forces and other militant groups, with a string of small-scale explosions.

Sunday however marked the first time Islamic Jihad was targeted, in an indication the group is viewed as part of the establishment in Gaza.

Many of the more recent attacks are believed to be the work of fringe Salafist groups that have made a name for themselves as unafraid to challenge Hamas, seeking to outbid them in the fight against Israel and the defense of Islam.

There have also been attacks claimed by groups purporting to be from an IS branch in Gaza, although such claims have so far been largely discredited by online militant forums.