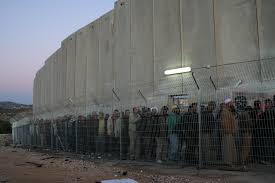 Israeli settlers, Monday, put up banners in multiple areas in Bethlehem district calling for more Palestinian lands to be confiscated for the purpose of settlement construction and expansion, according to local and security sources.Ahmad Salah, coordinator of the Anti-Settlement Committee in the village of al-Khader, south of Bethlehem, said a group of settlers arrived at the entrance of the village and set up large banners warning of a new round of “struggle for land” and a rise in settlements activity.

According to WAFA, the incident came a day after Jewish settlers organized three provocative rallies near Ramallah and Bethlehem in call-up for more settlement activity in the occupied West Bank.

One of the rallies was organized at road 60 between Nablus and Ramallah, and developed into a riot and a clash with Palestinians from the village of Lubban e-Sharkiya. WAFA correspondent said the settlers waved slogans and banners that threaten Palestinians of an imminent war.

Settlements built on Palestinian land occupied by Israel, including East Jerusalem, are deemed illegal by the United Nations. Israel’s refusal to halt their construction and expansion has at times obstructed the peace process and increased resentment and distrust with the Palestinians.

Peace Now, an Israeli human rights group, says, “Over the years, Israel has used a number of legal and bureaucratic procedures in order to appropriate West Bank lands, with the primary objective of establishing settlements and providing land reserves for them.”

“Using primarily these five methods: seizure for military purposes; declaration of state lands; seizure of absentee property; confiscation for public needs; and initial registration, Israel has managed to take over about 50% of the lands in the West Bank, barring the local Palestinian public from using them,” it added.

Since 2009, when Prime Minister Benjamin Netanyahu returned to office, until 2014, figures show that the Jewish settler population in the West Bank has grew by 23 percent.

According to the Council for European Palestinian Relations (CEPR), “There are currently 121 Israeli settlements and approximately 102 Israeli outposts built illegally on Palestinian land occupied militarily by Israel since 1967 (West Bank, East Jerusalem and the Golan Heights). The largest of the illegal settlements is Modi’in Ilit, with a population of 46,245 as of 2009.”

It added, “These settlements and outposts are inhabited by a population of some 462,000 Israeli settlers: 191,000 live in settlements around Jerusalem and an additional 271,400 are spread throughout the West Bank.”