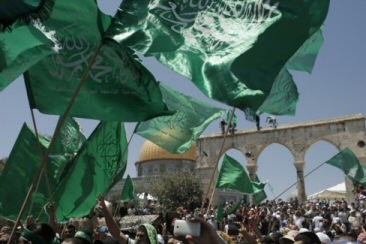 Hamas officials on Wednesday rejected demands by Fateh leadership to hand over rule of the Gaza Strip and called for an ‘uprising’ against Palestinian Authority security forces.Fateh leader Azzam al-Ahmad had said on Sunday that Hamas ‘foiled’ efforts towards a unity government, and that the group must hand over rule of the Gaza Strip as a condition for forming the new government.
Hamas spokesman Sami Abu Zuhri said that the Fateh leader’s comments created tension and were ‘untrue,’ blaming the failure to form a unity government on Fateh’s ‘factionalism.’

He added that Fateh’s calls to reform the unity government were a media maneuver, reiterating his movement’s willingness to form the government based on national consensus.

The unity government formed in June 2014 repeatedly failed to overcome divisive issues between Hamas and Fateh, and the PLO appointed a committee last month to lead negotiations for reforming the government.

The consultations have yielded little consensus thus far and received criticism by non-Fateh factions, who convened earlier this month to condemn recent PA arrests as hindering the negotiation process.

This sentiment continued Wednesday when deputies of the Hamas movement renewed calls for a ‘revolt’ against the PA over its sweeping arrests of alleged anti-Israeli militants.

The deputies, in an act of defiance, held a meeting in the parliament building in Gaza City that has not convened officially since 2007 when Hamas expelled PA security forces after a week of deadly clashes.

They called for ‘an uprising and a revolt against the political arrests’ carried out by the PA in the West Bank and for Palestinian factions to adopt ‘a firm stand against the Authority’s crimes against the resistance and its members.’

The deputies condemned the PA’s security cooperation with Israel under the 1993 Oslo accords as amounting to ‘high treason’ that served ‘Zionist security’ interests.

Coordination in security operations as laid out in the Oslo Accords planned for a gradual power transfer in the occupied West Bank from Israeli forces to the PA over the course of five years.

More than 20 years on, however, Hamas and other factions continue to accuse the PA of acting on Israel’s behalf through security cooperation.

On July 7, Hamas accused the PA of having detained more than 200 of its members in the West Bank, in a sweep that MP Khalil al-Haya charged was aimed solely at ‘assisting the occupier’ against anti-Israeli militants.

Hamas leader Abd al-Rahman Shadid said at the time that many of those detained were left with signs of torture, and that the arrest campaign was part of an organized project aiming to ‘eradicate the movement.’