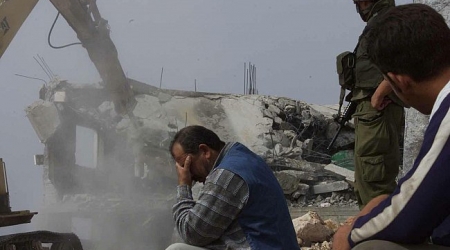 Israeli forces Wednesday handed Palestinians in Masafer Yatta, an area to the south of Hebron, notices notifying them of their intentions to demolish two residential tents and ordering them to stop the construction work on seven residential structures, according to a local activist.Coordinator of the anti wall and settlement popular committee in southern Hebron, Rateb al-Jabour, informed WAFA that forces stormed two areas in Yatta and handed locals there notices ordering them to stop the construction work on their homes, which shelter them and their families.

Forces further handed Othman Abu Qabita a notice informing him of their intentions to demolish his two residential tents, which shelter him and his family of 11 members.

Jabour condemned the Israeli practices, which he stressed, aim to make it difficult for the original Palestinian owners of the land to live there, thus forcing them out of their land for the benefit of settlements expansion.

OCHA said that, “Thousands of Palestinians throughout the occupied Palestinian territory (oPt) have been forcibly displaced or are at acute risk of forced displacement as a result of multiple factors, including policies and practices related to the ongoing military occupation and recurrent hostilities between Israel and Palestinian armed groups.”

It stressed that, “Forced displacement has a series of immediate and longer-term physical, socio-economic and psycho-social impacts on Palestinian families.”

“It deprives them of their home and land – often their main asset – and frequently results in disruption to livelihoods, a reduced standard of living and limited access to basic services. The impact on children can be particularly devastating.”

It noted that in Area C and East Jerusalem, each year hundreds of Palestinian homes and other structures are demolished due to the lack of Israeli-issued building permits. “The restrictive planning system makes it almost impossible for Palestinians to obtain permits, while providing preferential treatment for Israeli settlements.”

Most Palestinians are forced to build without a permit to meet their needs. In many cases, displacement is due to cumulative pressure created by a combination of factors, including settler violence, movement restrictions (including the Barrier) and restricted access to services and resources, said OCHA.

Four houses were demolished on punitive grounds in 2014 for the first time since 2005, added OCHA.