Soldiers Assault And Kidnap Children In Jerusalem, Many Injured 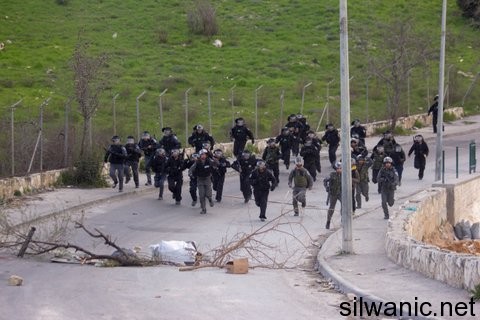 Undercover Israeli forces have kidnapped, on Wednesday at night, several Palestinian children, after invading their homes in the al-‘Isawiyya town, in occupied East Jerusalem. Soldiers also clashed with local youths causing injuries.The Wadi Hilweh Information Center in Silwan said clashes took place in the town, after the soldiers invaded it and started breaking into homes and searching them.

It added that the soldiers kidnapped several children; three of them have been identified as Amir Mahmoud, 16, Mohammad al-Kiswani and Majd Nasser.

On Wednesday evening, soldiers kidnapped Baha’ Abu al-Hawa, from at-Tour neighborhood on Jerusalem, after stopping him at the Zaim roadblock, east of the city.

The soldiers claimed he “tried to attack them,’ and started beating him up, before cuffing him, and took him to an interrogation center in the city.

Mohammad abu al-Hummus of the Follow-Up Committee in al-‘Isawiyya said the clashes mainly took place in the Schools neighborhood, Mahmoud neighborhood and Dari neighborhood, and that undercover Israeli soldiers infiltrated the town and fired rounds of live ammunition.