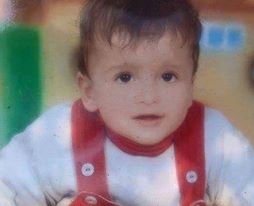 Right-wing Israeli terrorists near Nablus firebombed a Palestinian home on Thursday night, starting a fire which destroyed the house and burned a baby to death, as well as severely burning the baby’s four-year-old brother, mother and father. The baby who was killed in the attack was about 18 months old. He was identified as Ali Saad Dawabsha.

The attack took place at about 2:30 in the morning, in the village of Douma, in the northern part of the West Bank near the city of Nablus.

The Israeli terrorists arrived in the dead of night in the village, and began by spray-painting hate slogans against Palestinians on the Dawabsha family home. They then broke a window and threw a firebomb inside, setting off the fire that killed the baby.

The graffiti, written in Hebrew, included the phrase ‘price tag’, which is a slogan used by right-wing Israeli extremists against Palestinians – the reference being that continued Palestinian existence in the Israeli-occupied West Bank would exact a price from the Israeli colonizers.

Although the Israeli military spokesperson issued a ‘tweet’ on his Twitter account that this was a ‘barbarous act of terrorism,’ the army has not issued an official statement, and the perpetrators have not been found.

The Father Sa’ad Dawabsha, the mother Reham, 37, and their child Ahmad, four years of age, have been seriously injured in the attack.

Sa’ad’s home was completely burnt, while the home of Ma’moun Rashid Dawabsha was partially burnt.

He added that a young woman, who lives near the Dawabsha home, saw the extremists hurling the firebombs into the home before fleeing the scene.

Palestinian and international human rights groups have documented on multiple occasions the relative impunity of Israeli settlers who attack Palestinian civilians. Very rarely do the cases result in an arrest, and prosecution of the perpetrator is even more rare.