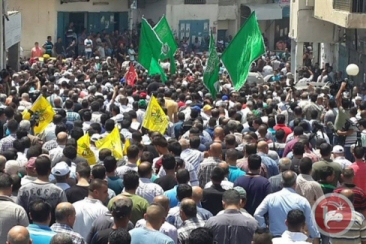 Israeli forces shot and injured at least eight Palestinians with rubber-coated steel bullets during clashes near al-Jalazun refugee camp that broke out on Saturday, following the funeral of 17-year-old Laith al-Khaldi, who was shot dead by Israeli forces the day before.Israeli forces reportedly fired live and rubber-coated steel rounds at dozens of Palestinian youth as they marched toward the illegal Israeli settlement of Beit El, northern Ramallah district, following Khaldi’s funeral.
An Israeli army spokesperson said she was looking into the incident.

Witnesses said that settlers also opened fire on the demonstrators, according to Ma’an.

The injured Palestinians were taken to the Ramallah Governmental Hospital for treatment.

The 17-year-old was shot in the chest and later died from his injuries at the Palestine Medical Complex after two surgeries failed to save him.

He was at least the 20th Palestinian to be killed by Israeli forces this year, not including those killed in attacks by Israeli settlers.

Israeli forces shot dead another 17-year-old Palestinian on Friday evening near the Israeli ‘buffer zone’ in the Gaza Strip, and earlier on Friday, an 18-month-old infant was killed in an arson attack carried out by Israeli settlers in southern Nablus.

Jalazun refugee camp has been the site of frequent clashes with Israeli forces in the past.

Earlier this year, the head of a local popular committee, Mahmoud Mubarak, said that the camp was being ‘systematically and unnaturally’ attacked by Israel, with clashes breaking out on a near-daily basis.

Khaldi was the second Palestinian from the camp to be killed this year, after Ali Mahmoud Safi, 20, was fatally shot during a protest near Ramallah in March.

Mubarak said that four residents of the refugee camp were killed by Israeli forces last year.